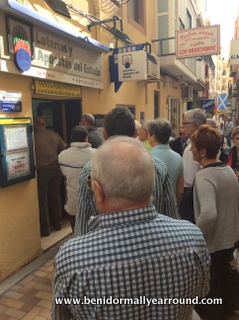 You can tell that the countdown is on – not for Christmas but for the El Gordo lottery! I have never known such a gambling nation ... queues form outside lottery shops and kiosks daily in the lead-up to the day, especially on the Calle Gambo and another just off the walking street in the Old Town, both of which have sold winning tickets in the last few years. El Gordo is the world's biggest lottery and takes place in Spain on 22nd December – this year falling on a Monday. El Gordo, meaning "the fat one" is an annual event and sends Spaniards into a frenzy.

People spend literally hundreds of euro's on lottery tickets for this one. The El Gordo dates back to 1812 so has a long history and tradition. The Spanish lottery operator gives 70% of the revenue from ticket sales to the prize jackpot fund... meaning the more people that play the bigger the jackpot. Since 1st January 2013 any lottery winnings over 2,000 euros are taxed at 20%. This is expected to raise more than 800 million euros annually for the taxman as the Government seeks ways to raise more revenue. Tickets are sold online to more than 100 countries and are purchased by four out of five Spanish residents - all hoping to win "a slice of hope" in these troubled economic times. However, this year the Alicante province have been allocated 12% less tickets – 128 million euro´s worth against 144.3 for last year. 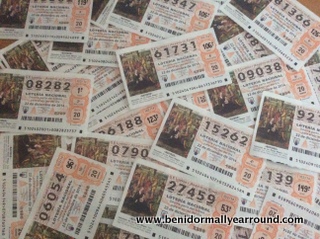 The tickets are very expensive in comparison to the normal lottery, costing 200€ to purchase the entire ticket. The tickets are divided into 10 sections, known as "decimos" and cost 20€ each enabling you to purchase part of a ticket. If that number is drawn you will therefore receive one tenth or how ever many sections you have bought of the prize fund. This is the time when many neighbours, friends, clubs and penyas form syndicates to purchase their tickets giving them a greater chance of winning. Unlike the normal Euro Lottery, where you choose your own numbers, the El Gordo already have 5 pre-printed numbers and many people trawl around the lottery shops looking for their "lucky numbers" - possibly in the form of a memorable date. This means that once the retailer has sold his allocation there will be no more deliveries so don´t leave it too late! 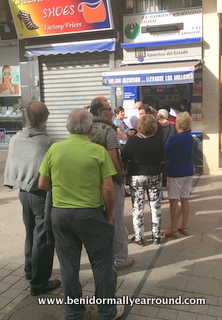 The odds of winning are certainly in your favour as one out of every three tickets sold win something. The draw takes place at the Teatro Real de Madrid in Madrid and is broadcast live on Spanish TV and on the internet from 8am - the draw starts at 9am. The actual process takes hours to complete as there are thousands of prizes to be won and children sing out the numbers ... lovely at the beginning but hours in gets somewhat tedious.

They have 2 huge spheres - one contains wooden balls with the 5 digit numbers on them and the second has balls with the prize value on. A child stands next to each sphere (quite an honour to be picked) and as the ball is drawn the child takes the ball over to a table where the official lottery observers and members of the lottery commission sit to officially record the numbers drawn. The balls are then placed into special racks and kept on display. Then it is all repeated again on 6th January for the El Niño lottery!