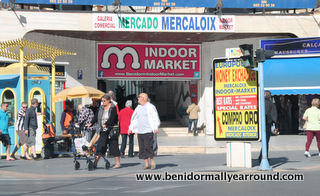 One thing which has stood the test of time here in Benidorm is “Sheila´s Money exchange" – located at the Indoor Market in the Rincon de Loix. Banks, bars and restaurants come and go, but Sheila´s, which opened up in 1985 is still going strong – testament to their honest reputation and legion of loyal customers.

A Yorkshire lass at heart, Sheila is originally from Harrogate but moved here from Chertsey in 1978, with husband Bob and then young daughter Sarah. They had just spent all of February in Benidorm and on their return were greeted by snow and horribly cold miserable weather. In an instant they looked at each other, thinking what are we doing here, sold the supermarket they ran and headed back to the Costa Blanca – never regretting for a minute the decision they made. 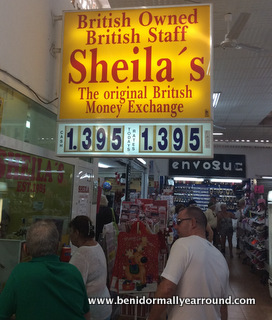 Initially they just enjoyed the relaxed laid back lifestyle but then itched for something to do. Sheila looked around to see what was missing and after much research found it virtually impossible to buy any English books here – and so opened up a bookstall. She had stacks shipped over from the UK and also offered a book exchange, buying back the books once read. From that they started the money change – back then it was peseta´s and they had no glass screens or security.

Sadly now though the banks and insurance companies both insist on it but it is still in exactly the same spot. She would get holidaymakers coming back year after year, popping by and asking for help and advice – and on numerous occasions would accompany them with Sarah to the hospital or police station, interpreting and assisting.

Many turned into friends and word spread among the visiting Brits to always head to Sheila´s for their exceptional service. Often the queues would wind around to the next aisle such was the loyalty to her. There is even a picture of her from 1994, wearing her in their day trendy Deirdre specs behind a massive computer screen working in the stall- what memories! In 2003 Sheila retired to spend time enjoying being a gran and Elaine took over. 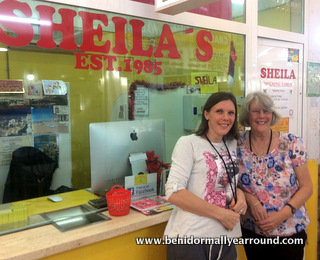 But this year, together with her daughter they are back, working together side by side… and what a great team they make. They are open from 9am until 5:30pm Monday to Friday – even if most of the stalls are shut Sarah will still be there until closing time. On Saturday they close slightly earlier at 4pm and often Sarah brings her daughter, little Sheila to help, so you will find three generations there together. Being named after her mum and best friend it looks like this family business will be handed over to the next generation!

They will only be closed for 3 days over the festive period: 25th December - Christmas Day; 1st January – New Years Day and 6th January – 3 Kings, a National Bank Holiday across Spain. Sheila´s will be OPEN on Boxing Day, Saturday 26th December.