The ITV Daybreak production team are arriving in Benidorm on Wednesday to do some live shooting in and around "The Square" during the early hours... so if you see a cameraman you'll know where he's from! They hope to get a feel of the nightlife and what attracts millions of Brits to Benidorm every year which will be transmitted via a live link next Monday and Tuesday. I will be accompanying the crew and bringing you updates and pictures of the filming. 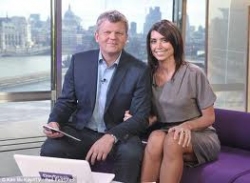 The live link will be broadcast back to Daybreak presenters Adrian Chiles and Christine Bleakley over two mornings and presented by Steve Hargrave the Daybreak Entertainments Correspondent. On Monday 1st August the link will be from the Levante Beach, opposite the Ship Cafe at the Rincon end and joining him will be a special celebrity guest then on Tuesday the broadcast will be from the Sol Pelicanos hotel with two further celebrity guests! The Pelicanos was the location of the ITV comedy series "Benidorm" .... so perhaps the specials guests may have a link to that ?????
Why not come down on Monday morning and get to see a live broadcast - you may even get seen by everyone back in the UK! You will need to get down there by 6.45am as the first live broadcast is at 7am.