Back filming in Benidorm 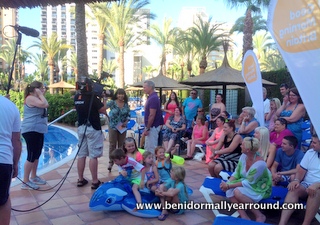 ITV´s Good Morning Britain breakfast program came to Benidorm to broadcast live from the Sol Pelicanos hotel – known to most as the Solana Resort from the hit ITV comedy series! The live broadcast was anchored by popular presenter Ranvir Singh who was accompanied by the dishy Dr Hilary Jones and Fashion Correspondant Mark Heyes.

Up early around the Sol Pelicanos poolside 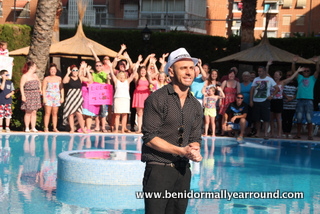 The British holidaymakers staying at the hotel were certainly up early - bright eyed and bushy tailed for the first live transmission at 7:30am, with many clutching signs they had prepared to say hello to friends and family back home. The crew came over at the weekend and started to pre-record some clips, which are being interspersed throughout the 3 day broadcast – with today being the first day live on air. 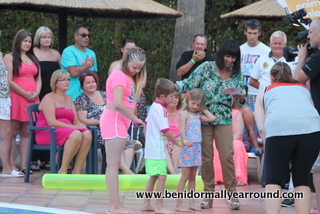 Ranvir spoke about child security while on holiday and showed some fantastic devices and innovations, modeled by some very well behaved children. The temporary arm tattoo, which is waterproof and lasts around 2 weeks has important information including the parents contact details and I thought was an excellent idea... perhaps some of the stag & hen parties that come out here would benefit from that one!

Pop up clinic in Benidorm 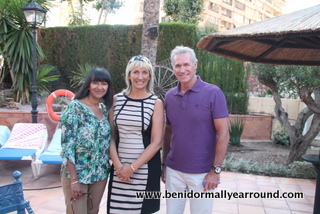 Dr Hilary was talking about holiday health and any associated problems and earlier in the week had recorded some pop up surgery questions with holiday makers around the resort. He has been the medical presenter since the original GMTV was aired back in 1993 – and still as suave and knowledgeable may I add. Between recordings he had as many people wanting a picture with him as asking about a medical ailment – which he was more than happy to do, on both counts! 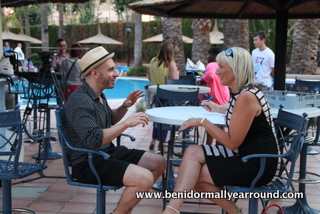 Mark Heyes was doing what he does best – fashion makeovers! Today he had the task of a girls night out, making over 3 best friends Amy, Jinny and Kelly. I spoke with Mark before he went on air and he told me that he had only flown in yesterday afternoon, straight after presenting on the Lorraine show. Its his first time ever to Benidorm and they all went out to the Old Town last night and enjoyed some fantastic tapas, soaking up the atmosphere. He said that he may venture and experience the nightlife on Friday – when they don´t have an unearthly early start. He was up at 5:30am today and watched the sun come up as revelers were just returning back to their rooms from the previous nights partying – that's Benidorm! 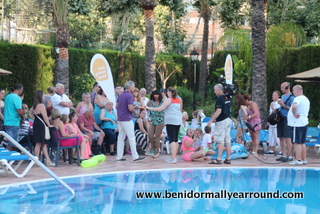 Tomorrow, Thursday they will be broadcasting live from the Palm Beach Hotel - then on Friday they will be at the Levante Beach front! It will be an early start - they need people down there for around 7:15am and they will be broadcasting till about 9:00am. They will be located opposite the Les Dunes Hotel and Suites - the yellow frame and glass fronted corner cafe. If you fancy a chance of being one of those in the background, paint a banner and get yourselves down there! You won´t be able to miss them - follow the assembled crowds and cheers and who knows, maybe everyone back home will see you on TV! 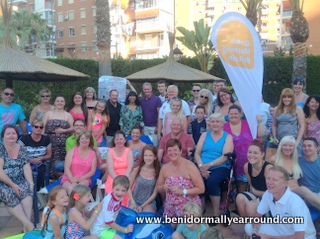 They will be filming on the Levante promenade as opposed to on the actual sand as incredibly it takes 4 weeks to get permission- It comes under the costal permissions and nothing to do with the Town Hall, but they would probably want holidaymakers in the background on the beach. Mark will be doing another makeover tomorrow - this time on a family and on Friday he will be showing all the ladies out there the best maxi dresses you should all be buying!