Ambassador Hotel in Benidorm - a favourite with Brits 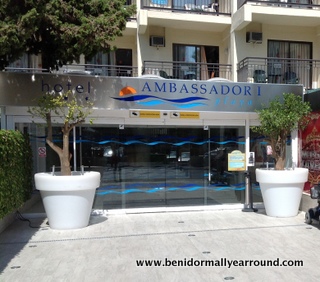 There is a huge choice of hotels in Benidorm and often it's a hard task trying to decide which is the best one for you. Most attract a mixture of nationalities but for one, or rather two in particular – The Ambassador Playa I & II, 95% of the clients are Brits - and with nearly 400 rooms, that´s alot of people! So what attracts so many there? The good central location on Calle Gerona must be one of the main temptations – virtually opposite Morgans Tavern in the heart of the nightlife so no need for taxi´s. But there has to be more to it, so I decided to pop in and spoke to the Director of the group. 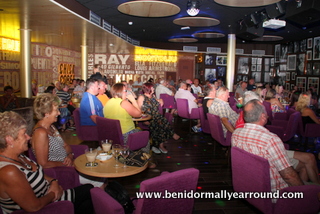 As well as the Ambassador hotels the group also has two other hotels in the heart of Benidorm: The Riviera, an adult only hotel which won a Tripadvisor award for excellence and The Presidente in addition to a selection of entertainment venues: The Western Saloon, Morgans Tavern and the UK Comedy Club. They have recently had a big makeover at the Riviera Music Lounge, creating a relaxing environment to spend an evening (no children as it is part of an adult only hotel)

95% of clients at Ambassador hotel are Brits 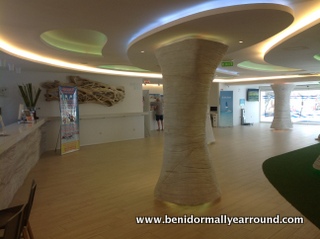 The two Ambassador hotels are linked and share many facilities. Playa I had a big makeover and now has a very modern and futuristic reception area – and Playa II will soon follow suit, undergoing a big renovation and modernization project, bringing it into the 21st Century. There was a constant stream of people arriving and checking in – particularly groups, here for a weekend of fun! They do not offer All Inclusive – the Director believes that all businesses need to benefit from tourism and by offering All Inclusive it discourages people from leaving the hotel complexes.

The Benicaldea Spa is a must 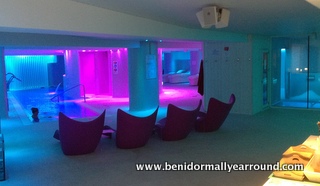 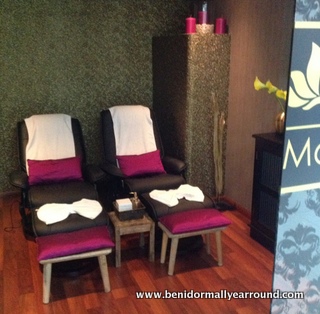 It is also open to non residents, so everyone can take full advantage of the amazing facilities – it costs 15€ for 2 hours and only 5€ to hotel guests. No children under 8 years are allowed and  those which are under 12 must be accompanied by an adult. You can book a variety of treatments and massages, including authentic Thai massages by professional masseurs from the world renowned Wat Pho in Bangkok.

The Explorers Club will astound you 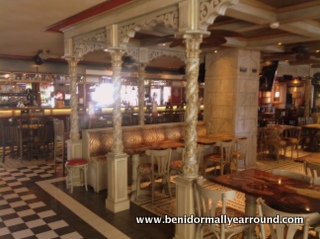 Back upstairs, one of the most incredible transformations has to be The Explorers Club – a themed bar capturing the essence of the famous Orient Express. In addition to the huge inside bar, there is also an outside terrace facing the Riviera hotel, which plays live sporting events on the huge television screens. 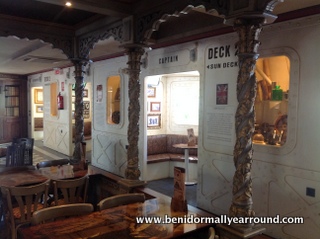 Back inside you can snook away in one of the private booths that resemble a train carriage, pot a ball on the snooker table in the games area or sit in the wood clad traditional library which incorporates a stage area for live entertainment – but the attention to detail is simply staggering and I can honestly say I´ve never seen anything like it in Benidorm. There is also the "Tropical Bar" just next to the reception – light and airy and overlooking the pool area. 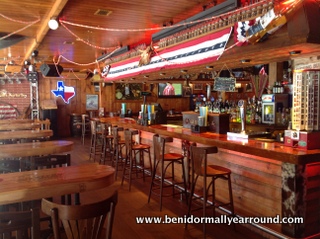 Right next to the Playa II – and actually linked from the reception area is the Western Saloon – a real Wild West themed bar on Calle Gerona. They have a constant line up of live entertainment every evening – including the fabulously talented Pablo Bloom. Its always rocking with a great vibrant atmosphere and on British Fancy Dress Day, this year falling Thursday 13th November, they will be offering those in Fancy Dress free paella – which will be cooked on the street outside

The hotel has been established in Benidorm for 40 years - quite an achievement! They have seen things come and go and the changing face of Benidorm - especially fads. Mobility scooters are one such contentious issue as news spreads that they have banned them - they have NOT! Due to space and security reasons they are limiting the hire to those that are over 55 and in genuine need of one. They use Amigo 24 and for those that need one they should book it through the reception - however, they cannot guarantee availability or a space for parking.