The 2015 Benidorm Gastronomic Calendar was launched from the rather windy 20th floor terrace of the Hotel Madeira on Friday - the very same terrace where the Mayor greeted Holloywood icon Joan Collins last year. The event was introduced by the Councillor for Tourism Gema Amor together with Mayor Agustin Navarro and representatives of the participating restaurants and those in the tourism & catering industry. It has only been in the last five years that Benidorm has been holding events to promote the town's gastronomy – the first of which was a "Tapas and Pinchos" competition. The week long event proved so popular, not only among the restaurants, but also with customers that more such events were added throughout the year. In her speech Gema said that it was important to continue to highlight the quality and standard of cuisine on offer here in Benidorm for the discerning diner.

Sadly many that come here on holiday - in particular the Brits, are still totally unaware of the amazing food available, sticking with traditional British fares, which is a real shame. Head up to the Old Town and experience the real Spain – ease yourself in gently with Tapas. The best place to head is Tapas Alley, so named because the entire street is made up of tapas bars! All the dishes are displayed behind glass and labeled in Spanish and English – but the majority of the staff all speak English anyway. They look like works of art and it almost seems a shame to eat them – some are served cold and some are heated up. 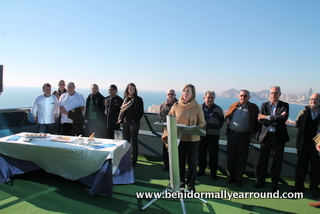 The first event of the Gastronomy calendar, which will be held from 21st February until 1st March is "Jornadas de la Cuchara" – which roughly translates to Hot Dish Days. This event aims to showcase a wide range of hot dishes, both traditional and modern but based on local recipes. 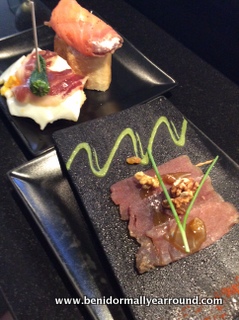 In addition to the five events that have been held over the last few years, three new ones have been added – a one day event on 30th March aimed to discuss and share new technologies and innovations relating to the catering industry. Secondly 2 day conference on 12th & 13th June to learn more about traditional recipe's from the area, which will be recorded and collated into a book to pass from generation to generation. Then finally, another competition from 27th June until 5th July. The restaurants love competing against one another and it is a real privilege to win as the public votes for the dishes. The Tourist Information office will produce free booklets detailing all the participating restaurants, with menus and beautiful colour photographs of the dishes, which is generally available about a week before the event takes place.