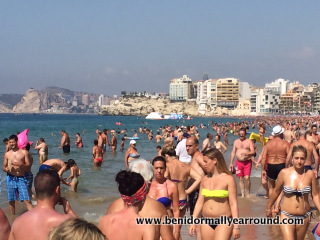 This week’s coverage of a busy Benidorm beach didn´t stop at the National UK papers. Nick Dixon, News Correspondent for ITV´s Good Morning Britain flew over today and I spent Sunday afternoon with him along the Levante beachfront. He was here – his first time to the resort to report whether the current troubles in other parts of Europe have affected and encouraged more holiday makers here to Benidorm. 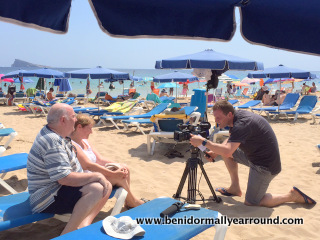 He first spoke to John and Elena McDonald from Ayrshire – their very first time to the resort. They usually holiday in Tenerife but decided to try Benidorm this year and are delighted that they did so. However, they did say that while in the sea yesterday they heard what they thought was gunfire and so stayed there, worryingly not knowing what to think until they realized that it was firecrackers being let off! Us locals are use to fireworks being let off in the middle of the day but obviously I can understand the confusion for visitors. 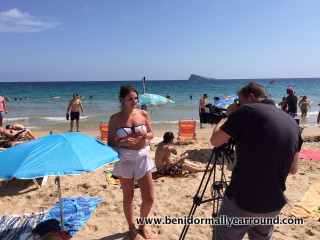 Next he interviewed Kerry Evans from Reading – again a Benidorm virgin! She came out with some friends who had rented a villa and it was a real last minute decision for her to join them. She told Nick that she was pleasantly surprised as to how nice it was and not at all “tacky” like what she was expecting – certainly not like the Benidorm Series portrays it. 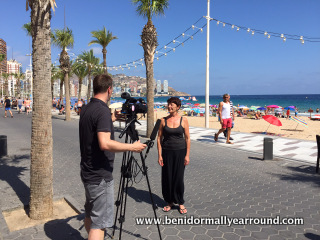 As well as holiday makers enjoying the sun, Nick also took time to speak with business owners here – Ann Marie Fry who owns and runs Scoobys British Café just off the Levante near to the Old Town and also Stuart Beaumont – owner of the hugely popular Geordie Bar next to the Indoor Market. Both have seen a surge of Brits – due to a combination of the strong exchange rate and also the uncertainty of security in some destinations. 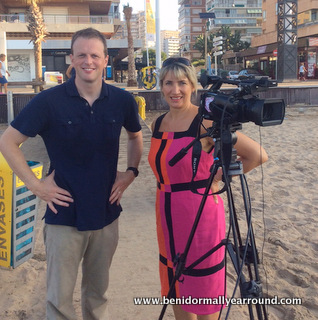 Look out for the broadcasts tomorrow morning – Monday 27th July at 6:30am and 8:20am UK time.Still quiet on the beach at that time but surprisingly at 7am people had already staked their front line places! After the live link up the days work was done and unfortuantely Nick was flying back to the UK but has promised to come back again for a family holiday now that he has had a taster!