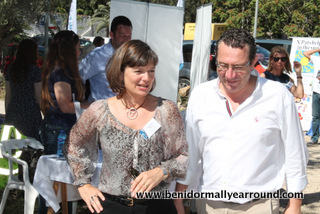 The fifth International Charities Fair took place today – an event organized by Pamela Dawson Tasker to bring together local charities and associations in the area. It took place next door to the popular Sunday rastro at El Cisne and so benefitting from the extra Sunday footfall. 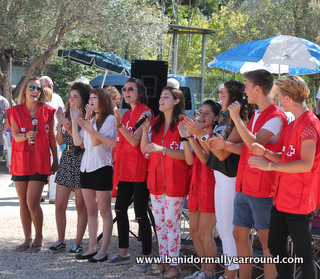 Sarah-Jane Morris, the British Consul and avid believer of volunteering in the community together with Benidorm Mayor Toni Perez officially opened the event at 12 Noon. In her speech Sarah-Jane said “It´s very heartening to see so many here, to support those volunteering”. After a few words from the Mayor pupils from the European school in Alicante – young and Cruz Roja volunteers entertained the crowds with some beautiful singing after which the Consul and Mayor walked around the stalls, taking time to talk to each. 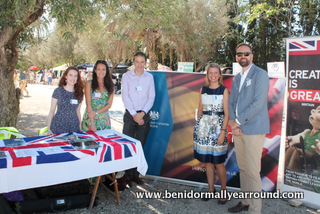 Lloyd Millen – the Vice Consul and members of the consulate team were there to talk to ex-pats about any issues they had and offer advice, keeping them very busy. This is the first time that the team have been at the Charities Fair and they were very well received. 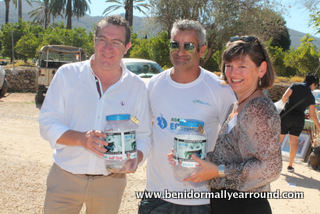 Martin Kyme, project manager for Emaus spoke with the Mayor and British Consul about the collection tins which the charity have instigated. They both thought the idea of creating an independant regular income for Emaus could be a promising and rewarding project, in what are tough times for the local childrens charity based in Altea. Martin was also there to promote the Euro a Month appeal - which the Benidorm Series is backing. 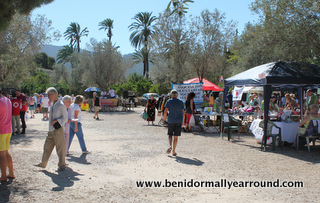 Some of the charities in attendance included Help International Benidorm, Samaritans in Spain, Alzheimers, U3A – who had a traditional tea room, Cruz Roja, AECC Cancer Charity, Lions Club and RBL plus separate Poppy Appeal stall.The Mayor even participated by having his blood pressure checked at the IMED Levante stand – making sure he is up to the job!
A great day with plenty of sunshine and live entertainment provided by Ian Oogly and his team. The aim of the day was to raise awareness of the various charities and voluntary organisations on the Costa Blanca to British ex-pats, who often move to Spain and have no family network available.