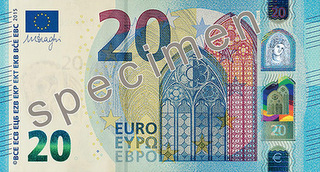 The new €20 banknote will start circulating within the Euro zone from this coming Wednesday -  November 25. Numerous security features have been incorporated into the new banknotes in order to protect and make them harder to counterfeit.

Among the new features to look out for are: 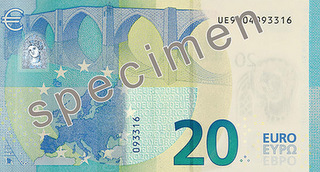 - Raised bevelled edges
- The small portrait window is transparent and when held up, light shines through.
- Hologram watermark
- Number 20 changes colour when tilted from emerald green to deep blue

Both series of banknotes will continue to circulate in parallel as legal tender – the same as the €5 and €10 notes which were introduced in May 2013 and October 2014.

The Indoor Market continues to be one of the best places to get more euros for your hard earned pounds - with great service and advice. Don´t be fooled into boards advertising much better rates as many have found out to their peril. In very small print at the bottom it will say for a minimum amount - often many thousands, in order to qualify for that rate by which point it´s too late.