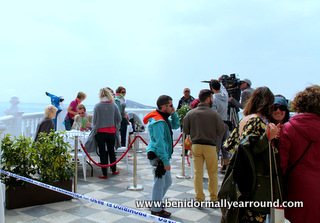 Benidorm is hot property when it comes to television – and film crews are nothing new here. Ever since 2006, when the first episode of the hit ITV comedy Benidorm was shot, others have followed in their footsteps. Next Tuesday - 5th January sees a brand new documentary made by Blakewey North, an award winning TV company based in Manchester who also made BenidormER, so lots of experience of the resort.

It will hit our screens on Channel 5 and is called “Bargain Loving Brits in the Sun”. This 8 part series was filmed over a four-month period, which started at the end of May, with a break over the hot summer period. Film crews followed the lives of British ex-pats (and some holidaymakers) who had made move and what they are doing here now. Its premis is that living in Benidorm is a cheaper (and warmer) option for some than the cold and costly UK, the ways they find of making their money go further and what it's like to earn a living here! 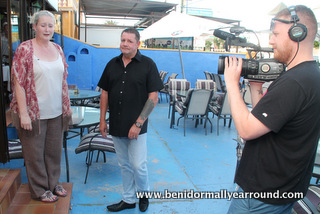 In next Tuesday’s opening episode you will see a number of well-known faces among which will be Benidorms favourite drag queen, Miss Levi. Crews followed Wayne and partner Des, cataloguing the sale his prized cabaret and restaurant venue “Showboat" to Karen and Mick Coburn, the subsequent handover and opening night. On Tuesday it will show the Coburns deciding to buy the Showboat. 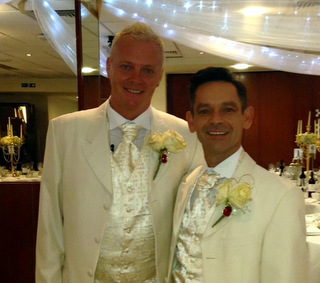 The team also happen to be on hand to record when Wayne proposed to Des at a swish local restaurant, Nuevo Alcazar (one of my favourites too) - make sure you have tissues at the ready and his acceptance. Obviously he said yes, even though he initially missed the proposal written in the card which accompanied the flowers as only Des could, but the crew attended their nuptials, which took place back in the UK. 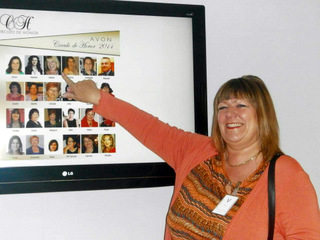 Another ex-pat you will see is Val Daly – referred to everyone as Ding Dong Val on account of being an Avon rep. But not just any old rep… she is the third highest earning rep across the whole of Spain. The British ex-pat, who lives in Albir has been in direct selling all her life and prior to moving here 12 years ago worked for Tupperwear, the well known home product company. 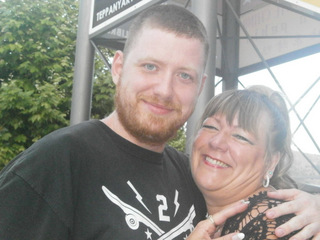 Her friendly yet persuasive manner has earned her a much coveted position in the Avon Circle of Honour Distributor ranking and she has been amply rewarded by the company, winning holidays to New York, Cuba and Marrakesh over the years thanks to her hard work and this April went off to Dubai! The film crew didn’t follow her there but they did turn up at her birthday bash at a local Japanese – seen pictured with cameraman Danny, which 40 of her close friends attended.

The initial three episodes have been finished and are in the can. Episode 1 features: Dean Rush - Bar manager at Camping Benidorm: Eddie Robinson - Singer living at Camping Benidorm trying to break into the entertainment scene as well as Wayne and Val as mentioned. It also features the "Sunday roasts" you can get here and the lifestyle on a campsite.

Episode 2 on 12th Jan features: The Coburns taking over at the Showboat: John Anderson from Stones Caravan Parking and the importance of the caravan business to Benidorm: Barry Harvey - The Amazing Barry, a magician trying to make it here and Brian Mountney and Paul Smith who run "Ultimate Stag & Extreme Hen" -  Benidorm's biggest specialist in the field.

Episode 3 on 19th Jan features: Tad and Olivia - with Tads latest venture The Queen Vic: Dave Dennis - Jack of all trades who becomes a bar owner: Karen Robinson - Owner of Simply Delicious, Benidorm's answer to Greggs and their delivery service and Paul Calow - owner of Positive Signs, which supplies many of the shops and businesses here with signage, catalogues, menus, leaflets and uniforms... no job is too big or too small for Paul. 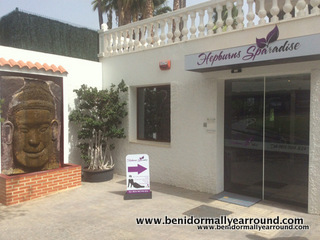 Other episodes will show Vikki Caton, owner of Hepburns Hair & Beauty salon and the opening of her new venture – Sparadise. For those that know Vikki her ever changing hair colour caused the editing department much work as well as many other faces you will instantly recognise over the remaining 5 episodes.

The series aims to portray Benidorm in a positive but realistic light and could be a good learning curve for anyone thinking of doing the same. With the current devastating rain in many parts of the UK it’s no wonder that many want to live the dream in the sun. Tune in to Channel 5 at 8pm UK /9pm Spanish time next Tuesday for episode 1.