For a first class night out you cannot beat Benidorm Palace - it has been voted Europe´s best cabaret theatre and nightclub for 2012, even beating the likes of Moulin Rogue in Paris! It is probably the most visited attraction in Benidorm and you are guaranteed a night to remember. The show changes every year and the new one, which was launched in May is called "Surreal".
But did you know that the Palace is owned by an ex-pat? I spoke to Christine Climent, who together with her Spanish husband Vicente bought and took over the place on 1st August 1990 ... still a memorable date for her. I started by asking Christine how she ended up living in Spain - she is originally from Widnes (and for those of you like me who didn´t know where that is, its between Manchester and Liverpool). She came on a weeks family holiday back in 1971and it was then that she met Vicente for the first time. At the time he was playing in a band at what was the Hotel Catalonia where they were staying... now better know as the Sol Pelicanos. She went back to the UK after her holiday, handed in a months notice and came back to Benidorm! 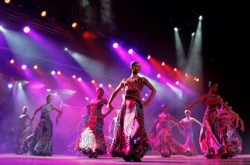 Initially Christine worked for part of the Warner Holiday group - many ex-pat girls got jobs in the holiday industry as rep´s at the time. She and Vicente got married in 1975 then they had the opportunity to take on a shop unit at the hotel, where they sold all sorts of souvenirs that appealed to the Brits on holiday, which was a roaring success. Vicente carried on playing in the band whilst Christine ran the shop and then along came their 2 children. Eventually Vicente retired from the band but like all men he soon got bored.... then the Benidorm Palace went up for sale. Having made some wise investments over the years they took the plunge and bought it - and as they say, the rest is history! 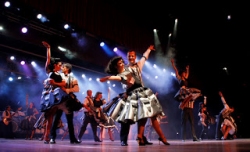 When they took over it was more of a Show & Champagne bar - they kept the show that was on for a further 6 weeks, until they learnt the ropes. They spent a huge amount renovating and built kitchens to turn it into a dinner and show venue, making it what it is now. Christine recalled the 3 day national strike in the mid 90´s which the lighting, technicians and stage hands took part in - they were shown how to operate everything a few day beforehand then drafted in help from family to keep the show going - even the children helped out! To this day it is still a family run business with both their children David and Joanna actively involved in running the place and making it the huge success it is.

The 1800 seater venue has also hosted many galas and events over the years. Among one in the early days was the Russian ballet dancer Rudolf Nereyev, who Christine said was rather "demanding", Julio Inglesias,  various comedians but the most memorable for her was the artiste Danny La Rue - who made his last public appearance at Benidorm Palace before passing away. Probably the most stressful she told me was the 3 day Interpol International Congress. Because of all the dignitaries it was a virtual security lock down, even she needed a security pass to get into her own building and the car-park was converted into a mobile hospital incase of an attack with a heli landing pad, but it all went smoothly thankfully. They also host many charity and fundraising events free of charge. 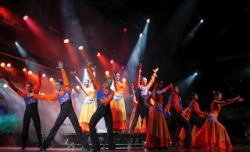 Benidorm Palace was used as a setting for the Christmas special of the ITV hit comedy series "Benidorm" during which Madge heard the news that her husband Mel had died. That was also when Asa Elliott made his debut onto the show as the cabaret singer. 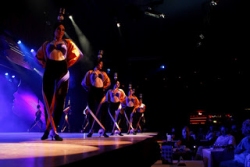 Over the Summer they haven´t been sitting back and having a break - it is one of their busiest periods and in addition they have been planning the schedule for Christmas. Come September, once the Summer rush is over they start brainstorming and putting ideas together for the next show ... which is managed Christine and David.

So what can you expect from a night at the Palace - certainly an unforgettable experience. You have 2 options - go for the full experience and have a meal first or you can just go for the show. Doors open at 8.30pm and there is always a queue of people waiting to get it. For those coming to watch the show only arrive a little later. You have your photograph taken in the beautifully revamped foyer and my advice is take the opportunity to dress up for the occasion - most people do but I always think it a shame when you see some going very casually dressed wearing football tops.. they do look rather out of place in the plush surroundings.

You are escorted to your table by a waiter who introduces himself and takes your wine preference - half a bottle per person is included in the meal in addition to water and half a bottle of good quality cava per couple with dessert. There are two menus to choose from in addition to fish, vegetarian and gluten free options so they cater for all - plus they haven´t forgotten about the little ones, a children´s menu is also available. How they manage to serve so many people within 2 hours is beyond me - even my soup was hot. The service really is first class.  - there are in the region of 150 staff ensuring everything runs smoothly, which in the busy periods can go up to 250 Christine told me!

The spectacular show starts a little after 10pm when the lights are dimmed and the stage bursts into a rainbow of colour as the dancers come out. The show is fast paced and continuous, interspersed with acts for approximately the first hour. The biggest applause when it came to the acts must have been given to "Golden Design" ... a group of 3 strong men sprayed gold and performing the most mind blowing routine, all in slow motion to music... almost everyone watched open mouthed. 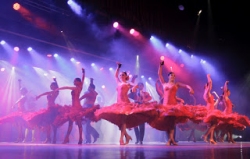 There was then a half hour break when the resident band and singer came out and the dance floor soon filled with people having a dance. During this time the pictures which were taken are bought around for you to look at - the photographers also come round to take pictures whilst you are seated at the table during dinner ... there is NO pressure at all to buy but they do make a lovely souvenir of the evening. 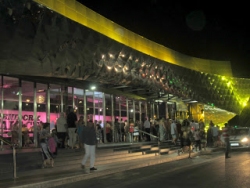 The second part of the show is just as fast paced, with numerous costume changes. There is a good mix of traditional Spanish flamenco and modern dance and of course the popular topless girls with colourful feathers - it is all very tastefully done and suitable for children so don´t worry about taking them. The props are just as fabulous as the costumes and it amazes me how they always come up with totally original ideas for every show. The evening finishes at around 12.40am and staff are on hand outside for those requiring taxis.