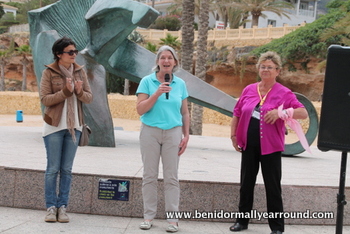 Despite what looked like a rather grey overcast start to the day, there was a great turnout for the Albir Eurothon today. As is typical of Spanish timekeeping, the 12 noon start turned more into 12.30 - which I suppose is pretty good going!

Elizabeth Bell from the British Consulate came, giving a speech in both English and Spanish, thanking everyone for taking part in this very important event and supporting two very worthy charities; the AECC National Spanish Cancer Charity and the Association Voluntariado in Alfaz. 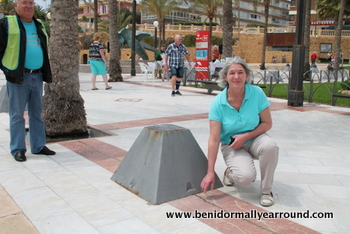 Gunilla Herrara, the Councillor of Social Welfare in Alfaz del Pi and Pamela Dawson Tasker, President of the Alfaz branch of the AECC also both made thank you speeches before the first of many 1 euro coins were placed down on the Albir promenade. 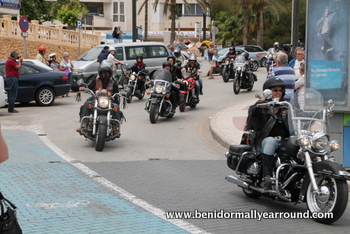 The Harley Davidson Costa Blanca Chapter where having a fun day at the Eucalyptus Park in Albir and had a drive through along the promenade - attracting a lot of attention as they roared past. They had also been collecting for the Eurothon and were due to make a handover later on in the afternoon.

Collection tins had been placed in many bars and restaurants for people wanting to donate but unable to attend and many volunteers went around throughout the morning. I must say I was somewhat shocked to discover that Elizabeth had been thrown out of one place - the newly opened La Scala Gastro Bar - above Poco Loco on the corner. I went in and spoke to the manager to ask why, seeing as it was for charity - and a Spanish charity at that and he said that they do not allow people to disturb customers. I pointed out that there were two "looky looky" men selling sunglasses as we spoke and he just shrugged his shoulders ... well I certainly won´t be going there for a coffee - shocking attitude. 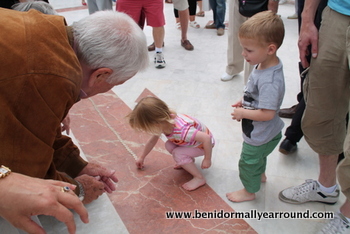 Most people were very enthusiastic to join in - and even young children were placing their donations along the chain.
At 1.30pm an estimated 2,500 euros had been donated - which is absolutely fantastic and with an hour left before the official finish, most encouraging. 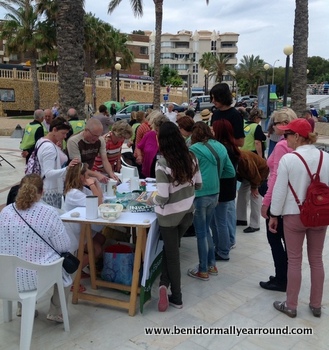 All the volunteers did a great job - standing guard at regular intervals along the euro-chain and giving out information leaflets from a stand by the anchor, explaining the point of the Eurothon to passers-by.

The sun started to peak out too - lets hope that was a good omen. I shall let you all know the total collected as soon as the coins are all counted. Well done to all involved - great team effort.