Fresh fish on the Costa Blanca 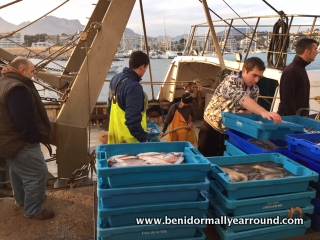 Altea and Villa Joyosa are both working fishing ports, which supply fish to most of the local restaurants and independent fishmongers in the province. However, the rough seas, caused by the recent bad weather have had a huge impact on productivity. Both ports have estimated an average 30% reduction in their daily catch, with La Vila quantifying that to almost 500 euros loss per vessel per day – a considerable sum. Villa Joyosa has a fleet of 35 fishing vessels and is the biggest employer in the town – while Altea is smaller, with a fleet of 12. 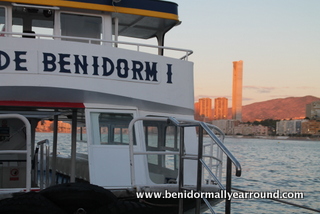 Up until the 1950´s Benidorm´s predominant industry was fishing too, but in 1952 the biggest tuna fishery was closed down and then tourism started to take over. Now the port in Benidorm is solely used as a yacht club and operates boat excursions to Peacock Island, Calpe and Tabarca Island. Last year the town welcomed the first, of hopefully many more, cruise ships to the resort, with the Town Hall actively encouraging tour operators to include Benidorm on the cruise itinerary. 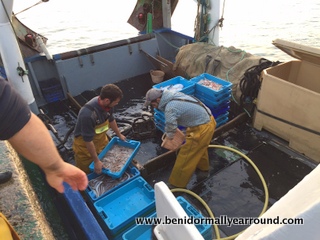 If you head over to Altea at around 6pm you can see the trawlers coming in one after another and then watch them unload their catch – which immediately goes to auction at the port. The number 10 bus from Benidorm stops virtually outside the harbor area. Chilled lorries stand by, waiting to get loaded and be on their way to places as far away as Valencia and other inland towns. Some of the ports like Villa Joyosa have their fishing rights suspended for a time so the ecosystem can regenerate itself. They do this on a rota system, so all the entire local fishing industry does not stand idle. 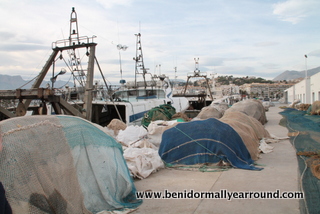 The consequence of the strong winds means fish prices have increased. Very few fishmongers have been able to offer sardines, whiting or anchovy – and those that do have stock have increased their prices by up to 80%, resulting in a kilo of sardines costing a staggering ten euros. Local restaurants are also struggling to find suppliers to maintain stock of certain local fish – so you may even find some things off the menu. 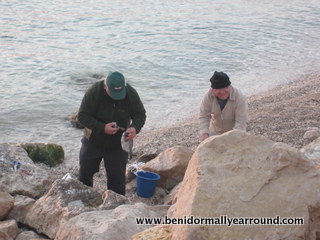 Fishing is a very popular activity and if you walk along the Abir to Altea seafront you will often see many men sitting there with lines of fishing rods waiting for a catch. It is lovely to watch them - I bet they take them home and cook it for their dinner after... you can´t get much fresher than that!