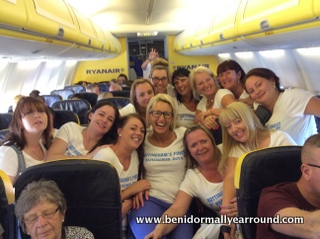 The chorus of ladies singing Viva España in the departure lounge bar gave me a fairly good indication that the group were heading to Spain - and I was not wrong as they boarded my Ryanair flight from East Midlands to El Altet Alicante! Indeed, Nicola and her entourage of 15 ladies were heading to Benidorm for 3 nights of partying - as their specially printed t-shirts confirmed to everyone. It was Nicola´s 40th and the girls were certainly going to make the most of it - starting at the airport. As the plane taxied down the runway they broke into "We're leaving on a jet plane" and cheers as the wheels left the tarmac! 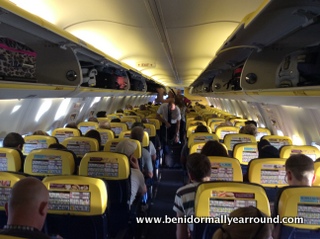 I spoke to the group, who were spread across various rows - some were Benidorm virgins and some were hardened regulars. They chose Benidorm primarily because of the combination of cheap booze and fantastic nightlife and were looking forward to dropping their bags off on arrival and hitting the town. The flight landed at 11pm so by the time they recovered their luggage and got into the centre it would have been well after midnight ..... nearer to 1am, but that certainly wasn't going to stop them. I think that they left the trolley dry - the pair behind me were making up their own original cocktail of Heineken and red wine! 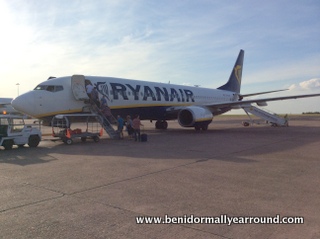 It was definitely not a quiet flight but the attendants are hardened to raucous groups, especially a Thursday night plane bound for Alicante - which they know means Benidorm! Note to travelers, if you want a relaxed quiet flight then do not book a Thursday evening departure - there is absolutely no chance of sleeping. However, as they paced up and down the aisle, with drinks in hand and getting louder and louder, a number of passengers were getting annoyed. In particular, a family with teenage daughters sitting close by, who called the flight attendants to say that the 15 year old was feeling very intimidated by their behaviour. He tried to calm the ladies down and then the seatbelt sign came on and the lights were dimmed - one way of getting them back into the seats I think. 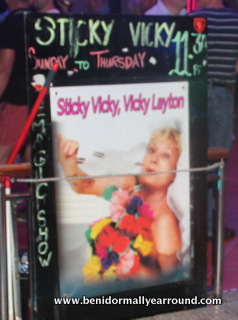 The girls are staying at the Ambassador Playa hotel, right in the heart of town and near to all the nightlife. They were all looking forward to seeing Sticky Vicky having heard so much about her but were going to leave that delight till Saturday. They were certainly a vivacious group of girls and full of life - looking to make the most of their long weekend away. As the two who sat behind me said "It's a chance to get away from the husband and kids and let my hair down". Some of the girls were chatting to a group of lads, also out for a weekend - bet they thought they'd struck gold and hadn't even landed yet! They invited me to join them in Cafe B, but probably rather sensibly, I declined their kind invitation. The girls are flying back on Sunday night – bet that flight is going to be somewhat quieter and back to work on Monday morning - mind you, not too sure quite how productive they'll be.