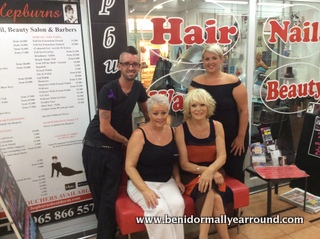 Once again Benidorm was buzzing with excitement as the resorts favourite hotel Manager, Joyce Temple Savage, aka the lovely actress Sherrie Hewson popped back. She came over for a few days this week, accompanied by an ITV film crew to do some recording. However, it was not for the ever-popular comedy series "Benidorm" which she is in, but for the "Lorraine" show, part of the breakfast program Good Morning Britain. 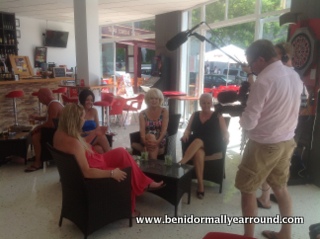 Sherrie has a genuine love for Benidorm and was only too keen to return, despite having spent the best part of 3 months here earlier in the year filming the 7th series of the "Benidorm" comedy sitcom. Many will remember her days in Coronation Street, but more recently she has, and is one of the longest serving regular panellists on the lunchtime chat show "Loose Women". 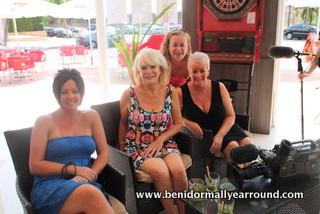 The theme of her trip was what British ex-pat women in Benidorm do here – and what better person to ask than Vikki Caton, owner of "Hepburn´s" - her hair and beauty salon when she is here filming. Tuesday afternoon was spent down in La Cala at the League Sports Bar recreating a Benidorm version of Loose Women! Vikki invited Cheryle Louise – entertainer and fellow Cool FM radio presenter and Vanessa Brown, local businesswoman and owner of Super Drogeria at the Indoor Market to make up the panel. It certainly was a fun filled afternoon, covering a variety of topics, which will bring a chuckle and raised eyebrow! 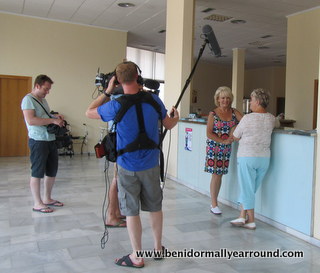 On Wednesday Sherrie spent the morning at the MABS Centre down in La Cala – a Cancer Support Centre. MABS are one of the leading charities in Spain dedicated to the support of all who are affected by cancer. It was founded by ex-pat Jacqui Phillips MBE in 1999 after experiencing cancer first hand – and she is President of the charity. Sherrie had a very informative chat with Jacqui and met some of the volunteers who help out at the shop. In the evening the crew were out and about in Benidorm, meeting plenty of ex-pats who both work and were on holiday. 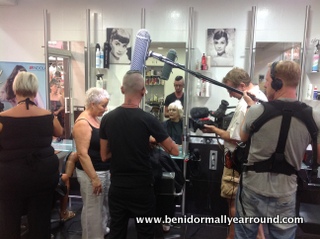 Thursday was spent at the Indoor Market, to the delight of many customers who happen to be shopping there. Sherrie was fantastic with them and happily stopped to have photos taken with them all. She was in the salon chair at Hepburn´s, having her locks pampered by Dean while chatting with Vikki about life in Benidorm – while passers by peered through the window!

The crew flew back that evening and Sherrie had one more night before heading back on Friday. As always she had a great time here in Benidorm – it´s virtually her second home and somewhere that she always looks forward to visiting when ever she has the opportunity. Maybe if and when she ever retires she may even move over... who knows!