The man behind Albi Senior - a Benidorm icon 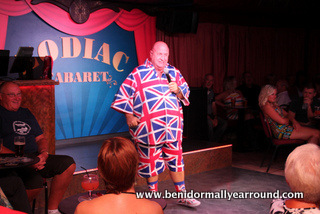 Albi Senior is one of the most talked about comedians on the Benidorm circuit - you certainly can´t miss him in his distinctive Union Jack attire. I met up with the man himself for a coffee and my first question was "is there an Albi Junior then"? He laughed as he explained how his name came about -  as he finished his show his parting catchphrase was "I´ll be seeing ya" ... it took me some time for the penny to drop and Albi had to say it a few times in his broad accent ! His real name is Gary although hardly anyone calls him that and even if they did I´m not sure whether he would realise as he is so use to Albi. 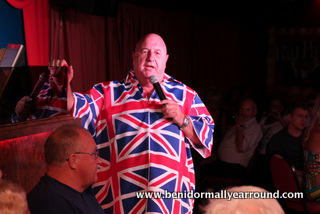 Albi arrived in Benidorm in 2002 - moving from the UK entertainment capital Blackpool, although as you can tell from the accent he is originally from Darlington, County Durham in the North East. He has toured the UK circuit and was voted comedian of the year in 1994 - every few minutes he would come out with a joke such as "I walked into a Chinese restaurant and saw a cockroach sucking on a rennie" and have me creasing up... hardly surprising than that we sat there for over 2 hours! As well as in the UK he has entertained the forces in Germany and been to Dubai twice - but surprisingly, comedy came fairly late in life to Albi as he never started until 1990. However, he has always had jobs which involved direct interaction with people and included being a taxi driver and running a bar - you can just picture that can´t you. 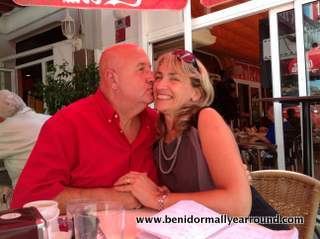 One of his heros is Roy Chubby Brown who is also a good friend and likewise hailing from the North East - must be something in the water. I asked where he gets all his gags and jokes from and he told me that he just listens out but his son also helps him out and emails anything apt which he hears. During his shows he always interacts with the audience so if you are a little shy do not sit near the front! When I went to watch him at the Zodiac he certainly packed the place out and had the audience gasping for air from prolonged laughter at some of the non PC gags he came out with - as he himself said, you couldn´t get away with that back home could you... but it´s all very lighthearted. 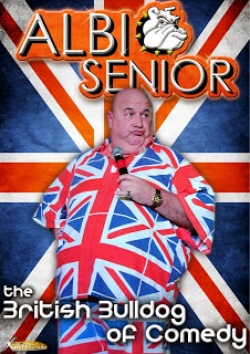 His characteristic outfit is specially made for him by a company in the UK called "Stagewear Unlimited" - a specialist company which tailor makes costumes for TV, films and the stage. He has a number of identical outfits and he keeps one at each venue to compliment his title "British bulldog of Comedy" - I wondered whether he actually had a real one. He does have a beautiful dog called Duke, but it is not a bulldog, which he loves taking out on long walks during the day.
Albi works 7 nights a week, performing two 1 hour shows per night - his first at 10pm in the Zodiac then at 11.30pm in Rockerfellas - both on Calle Gerona. However, he is off to the UK for a month on 22nd November doing a tour of some UK clubs before coming back on 23rd December to do the busy Xmas and New Year period. His UK gigs will be posted up on his facebook page if you fancy treating yourself to some laughter
https://www.facebook.com/albi.senior.7?fref=ts

He was so unlike what I expected - I know it´s a character but he is such a courteous gentleman in real life and certainly who I would want to be stuck in a lift with to pass the time....