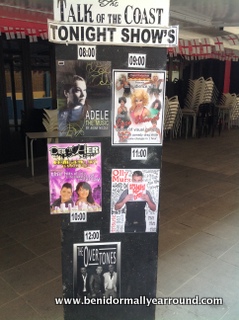 One of the attractions to Benidorm is the fantastic nightlife on offer - there is something for everyone regardless of age. Whether you are looking to enjoy the fantastic atmosphere of one of the many tribute acts, or just relax with a drink in hand while listening to the lapping waves on the beach, Benidorm is the place for you. Luckily the children in bars fiasco seems to have died down - something that was worrying not only those coming over on holiday but more so, the bar and club owners. It was NOT a rule that they had made up but one that was being enforced in a few situations by police from the Generalitat in Valencia. No-one is any clearer on the ruling but children are being allowed into the majority.

Sticky Vicki - for adults only! 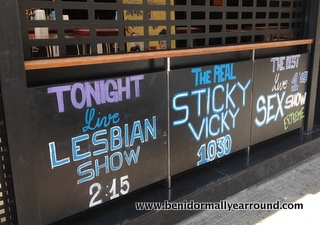 Obviously it is the parents responsibility to ensure that any acts which they take their children to are age appropriate - and I would say that most are. However, in years gone by it was shocking on occasions to see young children watching the likes of Sticky Vicki next to their parents. Now I think that the bar owners of the venues where she, or rather now her daughter performs are asking children to leave when she is on. There are plenty of great performers and groups on offer suitable for younger ones such as Olly Murs, Amy Winehouse, Westlife and Lady Gaga in particular.

Free entertainment on offer in Benidorm 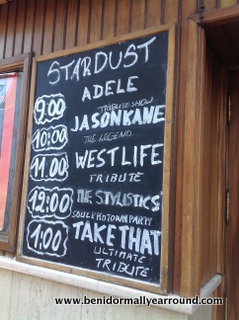 All of the clubs and bars have boards outside advertising who is on each evening, so just take a walk around during the day and have a look at what is on offer. There is no entry fee for any of the venues here, another great thing about Benidorm. However, it is expected and courteous that you at least buy a drink - remember, the entertainers have to be paid for. If it was anywhere in the UK you would most certainly be charged an entry fee then pay over the top prices for drinks. Here they may be slightly more than the daytime prices, but still very reasonable - especially if you comapre it to a UK pub or nightclub. 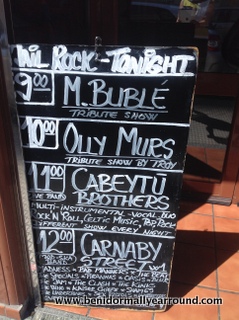 You could easily spend a week here and not see the same act twice such is the variety. Some acts are exclusive to a particular venue, such as comedian Tony Scott at Stardust or singing duo Debn´Her who are now only on at Talk of the Coast. Others run around from one place to another and perform 2 or 3 times in an evening - its pretty hard work for them, especially if they have to change and drive! But there are also plenty of smaller bars where you can just enjoy a drink and listen to some quite background music or have a game of "eyes down"!

-1 #2 joe mcallister 2015-12-28 21:50
im comeing to benidorm on the 10th jan 2016 are there
any caberet bars like the western saloon open ? thanks
Quote
-1 #1 Jason 2014-08-27 20:04
We have just come back on the 25/8/14 & the only problem we had regarding children in clubs was in the Western Saloon on the very last night of the holiday we were asked to leave by the security staff,this came as a surprise as we spent the last two weeks in there! After speaking to the owner to try and find out why after spending two weeks in his bar (and after being told via the clubs social media site children can come in)he told me some bars are being fined 38,00€ a month.
Quote
Refresh comments list