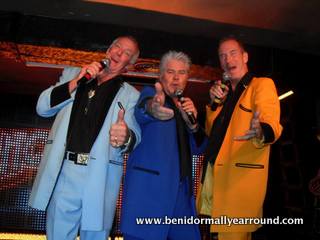 I agree with the adage "If you can´t find something which you like in Benidorm then you are impossible to entertain". With the number of performers here, you could easily stay for an entire week - in fact make that a fortnight and never see the same act twice. One group that you should make a point of watching are "Shoe Waddy Waddy" - you can´t fail to see them, dressed in the requisite bright teddy boy suits and thick crepe soled shoes! They have a wide all round appeal and as the name suggests are a tribute to the 70´s group Shoe Waddy Waddy. Regardless of age I guarantee that you will recognise most of the hits and be clapping and swaying along in no time - their fans range in age from 16 to 80. 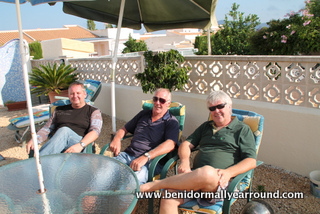 Originally a 4 piece there are now 3 in the group - Chunkz, Roy and Geoff are the regular members with Peter the reserve / stand in. The group have been in Benidorm for 10 years and this line up have been together for 5 years. I met up with 3 of the 4 - it is virtually impossible to get all of them together with holidays and other commitments hence the need for a stand in.

Roy is the longest serving member out of the four but none of them are deemed the head of the group - they are all equals. Originally from Coventry - literally down the road from Leicester which where the original group are from (coincidence?), Roy has been in Benidorm for 11 years. He was working in the entertainment industry in Torquay prior to moving here and has rock and roll in his blood - he even turned up on a scooter like the original Teds & Rockers use to! 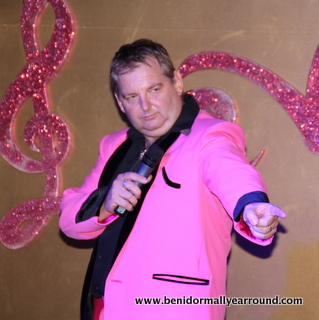 Chunkz is the baby of the group... and in fact has one of his own - 19 month old son George. I was somewhat intrigued about the origin of his nickname - his "real" name is Paul but hardly anyone calls him that, certainly none of the others do. Was it perhaps a cruel jibe from his youth - no! He is definitely up for a challenge and many years ago someone dared him to eat a tin of dog food - so he cut it up into 10 chunks and voila... we have Chunkz! I shook my head in disbelief - boys will be boys won´t they and was warned by the others not to ever dare him to do anything.

Chunkz is a Scouser (from Liverpool - just incase) and been here for nearly 7 years, although prior to living here he was in Gran Canaria for 5 years, also in the entertainment industry. Apart from the group and of course his son his other passion is American Football - he is part of the Spartans American Football team in La Nucia! The team have just bought out a 2014 calendar with proceeds going to the Emaus Children´s charity and Chunk is Mr July - if you would like to order one then send them a FB message on their Shoe Waddy page and it can be posted out to you.

Geoff has been around the longest, I am not cheekily referring to his age but as in living here and been in the area for 30 years! Back in the 80´s he had a bar on Calle Londres so knows the town and entertainment circuit very well. A London boy, back in his days he played for Millwall football club - bet he can still tackle well and even now continues to kick a ball around with the boys at the weekend.

Peter is the stand in for the group - and married to comedienne Jenny Renn. You will see him quite regularly in the line up as the other boys often have solo private gigs. By day Peter works for EHP Blanket Trips and by night he dons his drapes and crepes! 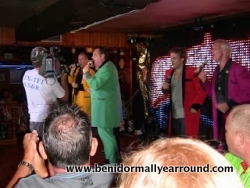 In 2011 ITV Daybreak came and filmed in the resort over 3 consecutive days. The entertainment correspondent Steve Hargrave spent one night out recording Benidorm nightlife and was filmed on stage at Morgans with the group. He performed a number, to a packed out venue, kitted out in a suave red jacket - and apparently did very well too. 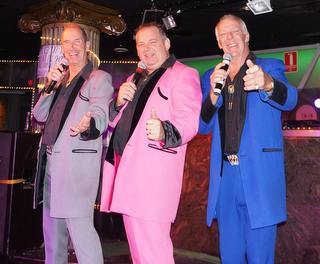 They each have 3 to 4 suits in a variety of vivid colours - I hope they never turn up in the same colour, that´s a girls nightmare! The show lasts 50 minutes and they get through about 12 songs, with each member taking turns to take lead vocals. They always open the show with "Dancing Party" and close with probably the most famous Showaddywaddy song "Under the Moon of Love" - mixing up the songs in between.
They have regular shows at Morgans Tavern, UK Cabaret Bar, Jokers, Sinatras, Cafe Benidorm and Steptoes at various times.  The group, like many other of the entertainers turn out to support charity and only last Sunday were on the stage at Showboat for the Emaus fundraiser... good on you boys.