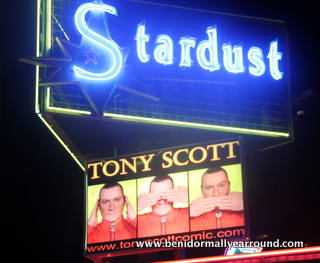 Refreshingly non PC comedian Tony Scott manages to pack the house out every night in Stardust, where he is exclusive and the resident comedian. Many have varying views and opinions of his somewhat controversial near to the knuckle jokes, but the fact that there is standing room only on virtually every night speaks for itself! He is easy to spot, with his distinctive ponytail and brightly coloured shiny shirts and comes out singing, leaving newbies wondering if they have come to the correct venue – but before long, they realize that they definitely have. 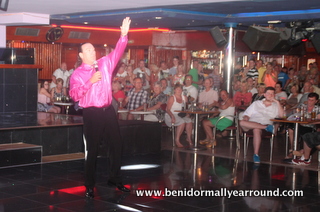 Tony is American, hailing from Pensacola beach in the sunny State of Florida, but has now been living and working in Benidorm for 23 years – I think that means he rather likes it here. His father was a professional wrestler (Big Daddy springs to mind), who used the name Tony Charles – but not a profession that Tony Jnr considered, although he became a semi Pro American Football player! Like many Americans, he travelled around Europe with a group of friends in his youth and ended up on the Costa Blanca – in Finestrat, a quiet typically Spanish village heading up into the mountains overlooking Benidorm. He wasn´t even aware of Benidorm and literally stumbled across it one night when he was looking for a place to watch a Mike Tyson boxing match – there was no British television in Finestrat back then. He was amazed with the place and quickly got a job as a promoter, having the gift of the gab – but it was very different back then to now. 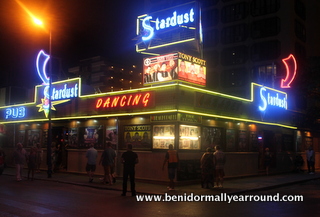 Eventually an opening came up and always taking the opportunity to seize the moment, Tony went for it – and has been on the stage of Stardust for the last 9 years. He has a grown up daughter here but most of his family are still in Florida – which he tries to visit every year, work allowing. He is a keen fitness fanatic and goes to the gym every morning, but also keeps fit by taking his 2 dogs for a run. He is a dab hand in the kitchen and loves cooking – his signature dish being bbq salmon. 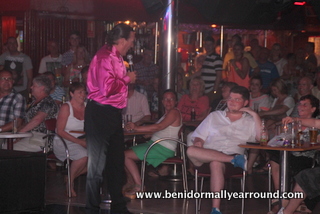 Tony thoroughly enjoys entertaining but his real passion is filming – by which I don´t mean peeping Tom type, with his incredible top of the range camera, using it to capture the often hidden treasures of the area. He is amazed that people come to Benidorm and never venture outside the few square miles of the Rincon with so many beautiful places on the doorstep. He often posts film clips he has recorded onto YouTube – of the beautiful beaches, up in the mountain etc to capture the varied landscape in the confines of a small area. Steven Spielberg and James Cameron better watch out! 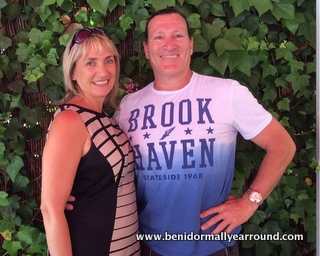 A bit like marmite, you will either love him or hate him. Audience participation is part of the routine – so if you are a shy type don´t sit anywhere near the front, although he does walk around the floor and home in on people. Just watch the expression on peoples faces, hands coming up to their mouths in shock at his outrageous offensive gags – he certainly wouldn´t get away with it back in the UK. And that is probably why he is so popular with the Brits here – he certainly doesn´t discriminate against anyone or anything to raise a laugh, whether it be colour, religion, gender or sexual orientation - they are all game on for Tony! You can catch Tony at 10:15pm every night in Stardust on Calle Gerona.

0 #4 Mini 2018-06-10 18:43
Just back from a stag in Benidorm seen this guy the other night definitely a must see superb
Quote
-3 #3 Roy 2018-05-31 23:03
I’ll tell you a story. In the early nineties I was rushed to hospital with a burst appendix. It ruptured so bad that I nearly died (probably a few hopes I would). After months of painful illness I recovered and although having problems still I feel ok. I have literally just been to see Tony Sh@t who was more painful than anything I have event been through. A sad looking older man who unlike any other comedian I have ever seen has no control over the audience and instead of having witty banter back chooses to get them removed by bar staff. His success must be built on the same people coming every year and feeling sorry for his low self worth and sorry looking state. He mentions in his act his numerous children. This makes me feel sorry for his partner(s)? Who would of had to endure a sweaty looking, greasy haired man grunting avive them. Well done Tony for being able to mug off the afflicted and the lonely, sorry if you think that is you.
Quote
+2 #2 margaret hudson 2015-05-24 12:07
just back from benidorm for the first time and went to see tony scott every night he was fantastic.the way he can control a packed audience is amazing the place was bursting at the seems just to see him.cant wait to get back brilliant xxxx
Quote
0 #1 Tracy Insley 2014-07-07 12:34
We have been coming to Benidorm for the past 7 years and we always make sure we see Tony Scott, from start to finsih you cant stop laughing, his interaction with the audience is a big plus to his act, he doesn't care who he picks on, young old, thin, fat, male female but all is taken in good humour in fact sometimes when he singles someone out you know that makes his show even better.