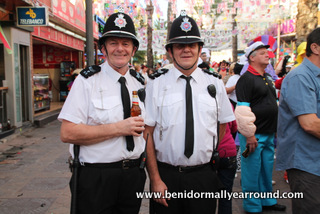 Did these two chaps, dressed as bobbies at last years British Fancy Dress Day have an inkling of things to come - well read on! The police exchange program witnessed in Magaluf and San Antonio this summer could well be extended to Benidorm next year. Seeing a British bobby patrolling on Calle Gerona and around the English Square, where a high concentration of British holidaymakers head could become a reality according to Juan Carlos Moragues. 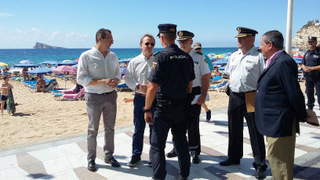 The Minister, from the Valencian Regional Government, visited Benidorm yesterday – his first official trip here, where the Mayor Toni Perez welcomed him and other officials including José Javier Cuasante , the National Police Commissioner of Alicante and Juan Carlos Hernandez, the National Police Commissioner of Benidorm. The delegation came to the resort to offer their support and backing to the Mayor for the Councils intention of moving the SATE office from the Old Town to the Rincon de Loix. 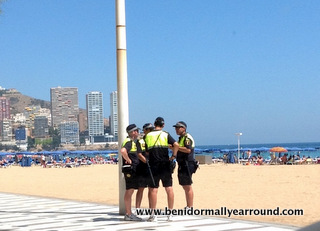 The Minister also announced that they are in discussions with the British Police but have yet to finalize numbers – but will still retain the same number of Spanish police on duty. However, the goal is to be operational by next Summer – 2016 if not earlier – making British holidaymakers “feel at home” when they see a bobby on the beat. It is hoped that their presence will deter unruly drunken anti-social behavior and also be of help to those that run into difficulties. 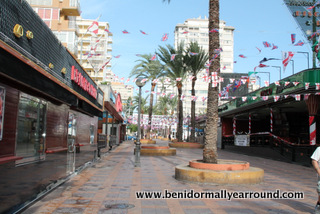 One thing they should take note of is that these patrols realistically need to be operational during the evenings and early hours – especially as the square is deserted during the day. The issues, if and when they arise are almost always in the early hours of the morning, following a marathon drinking session! 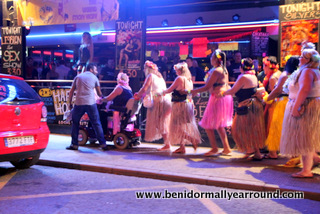 Party going Brits flock to Benidorm to enjoy the nightlife - particularly stag and hen groups. Age is certainly no barrier - old and young mingle together well into the early hours. It is no surprise to locals seeing slightly worse for wear revelers returning back to their hotels at 6am. With Benidorm only a short flight away, alcohol so much cheaper and entertainment free, is it any wonder why they come here.

I am sure that there will be a waiting list for secondment to spend a Summer working in Britain’s most popular sunshine destination by many British police officers…. And who can blame them.