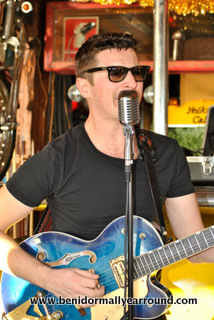 One of the main draws to Benidorm after the sun must be the nightlife - and I include drinking in that category! It is probably the entertainment capital of Europe such is the variety and diversity which can be found here.
Whatever your personal taste in music you can virtually be guaranteed to find it in one of the many bars and clubs. You can hear and watch a selection of very talented people, but one name which consistently stands out, not only to his audience but also among his peers is Pablo Bloom.

As he told me when we sat down for a chat "I feel blessed that I love what I do for a living" - and that passion is certainly expressed when he performs. Pablo performs his one man show "Rock & Roll Time Machine" 5 nights per week at some of the busiest venues in town and carries his musical instruments from one to the other  - Rock & Roll House, Uncle Ped´s, Western Saloon and Heartbreak on a regular basis - his full itinerary can be found at https://www.facebook.com/pablobloom?fref=ts 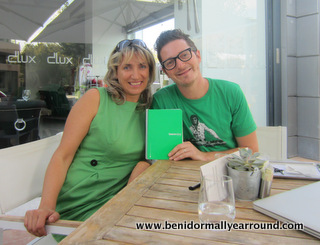 Pablo speaks with a real American twang so I was somewhat surprised when he told me that he had never actually lived in the States! He was born in Argentina and when he was 2 years old the family moved to Israel, where they lived on a kibbutz. The vast majority of those that lived there were Americans hence where Pablo picked up his accent! He did one of his three years compulsory army service then the family moved to Spain and settled in Valencia. He speaks fluent English, Spanish and Hebrew - although there is not a lot of call for that here in Benidorm he told me. 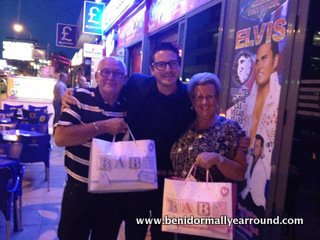 He played in various bands when he lived in Israel and so automatically decided on a career in the entertainment industry - he actually writes his own songs and can also sing them in Hebrew... isn´t he so talented! Bizarrely enough, despite his show being heavily influenced with 50´s/ Rock and Roll his knowledge of that era was limited to Elvis - which he picked up from watching Forrest Gump! 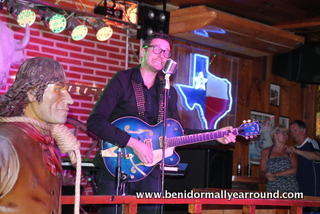 Soon after arriving in Valencia he was asked to make up the 4th member of a Beatles tribute group - he was Paul McCartney and they went off on a six month tour of Majorca - and in that time they didn´t have a single night off! After that the group commuted every night for 2 years from Valencia to Benidorm to perform the 2am slot at Talk of the Town! Well Pablo didn´t as within 6 months he met Mariana, who eventually was to become his wife and moved to Benidorm. The other 3 members continued to commute but as Pablo had so much extra time on his hands he started to perform in his own right as a John Lennon tribute alongside his group commitment. Eventually he decided to go it alone and has developed his performance so that it is a one man all singing all dancing spectacular. 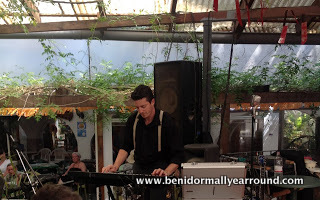 Humour is very important which is reflected in his performances.... he loves doing requests, tells jokes and is very spontaneous throughout, playing various instruments, sometimes in a most unusual fashion - intrigued now aren´t you? He has expanded his music portfolio and plays many current hits in addition to renditions of the Jersey Boys, Chuck Berry and other Rock & Roll classics. In addition to his nightly shows he also plays at El Cisne every Saturday at 12 noon and also on Sunday, but his stage time varies. 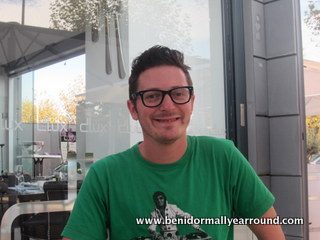 In his "spare time" which shall we say is pretty limited as he is father to 3 month old twins Oliver and Ella he has written a TV Show for children, which is being filmed next month. It is to inspire them about music, obviously, and it has him interacting with puppets along the lines of "The Muppet Show" if you can remember that far back. He showed me a clip on his laptop and the talent of this man is truly incredible... 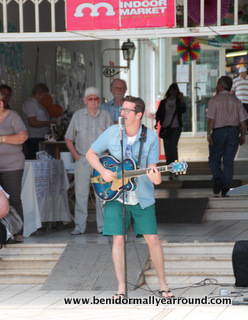 He also does stand up comedy having completed a months comedy class in Argentina and is due on the Spanish comedy circuit which is sadly lacking any comedy acts. He often injects quips and witty remarks into his nightly routines to the amusement of his audience who never know what to expect - he makes every show different and interacts with them constantly. He told me that when the twins were born his fans literally besieged him with the most beautiful gifts for them and is blessed having such loyal fans. Last year he was invited to play at a wedding in Galicia to a couple who met at one of his performances here in Benidorm - so he can add matchmaker to his repertoire!

I have seen Pablo lots of times as I live in Benidorm. I always take family and friends when they visit. I took my brother and sister in law last night to the western saloon and they thought he was awesome... Thanks for a great night.