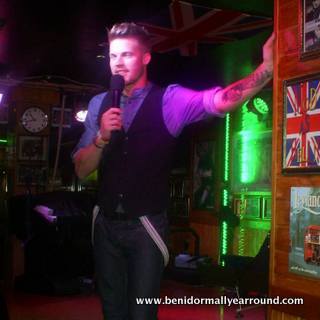 Benidorm is renowned for its selection and variation of entertainment on offer – with particular focus on the fantastic tribute acts. The resort offers something for everyone – but a firm favourite, especially with the girls is the Olly Murs show. Only going since March 2013, the talent behind the sensational voice, which ensures a packed room, is Troy Fallaize – although the fact that he is rather gorgeous to look at may also have something to do with it!

Troy has been in Benidorm for 4 years now, and in addition to his solo Olly Murs tribute act he is also part of the Boyzone V Westlife show. The group act is exclusive to the recently opened White Star cabaret bar within the Marina hotel – and you can see them every Tuesday, Thursday and Sunday at 10pm. He sings alongside best friend Lee Jewell, who is the motivator behind him going solo with the Olly show. Without Lee´s encouragement Troy told me he probably would never have taken the plunge – so all the screaming and appreciative fans have Lee to thank. 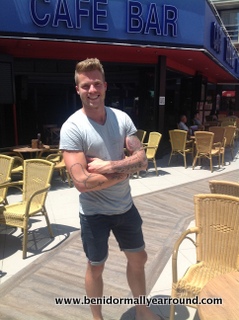 Troy is rather a fitness enthusiast, which is more than obvious when you meet him and it came as no surprise that he goes to the gym in Benidorm every morning with house mate Lee. He is very health conscious and eats 7 small meals a day - and to ensure he isn´t missing out on anything nutrition wise he also takes Juice Plus capsules. In fact, a bit like Victor Kiam, the man who said he liked Remmington razors so much that he bought the company, Troy is also a distributor for Juice Plus – proof that he believes in the product.

Originally from Chatham in Kent, Troy is one of 5 brothers and proudly wears his Help for Heroes wristband, as one is a serving member of the Royal Engineers, currently stationed in Germany. The rest of his arms are covered with his other love, body art – or tattoos! However, each one has a special meaning to him, with the main theme being music and flowers – he has a beautiful flower, which is in memory of his granma who he was very close to. He then revealed his somewhat toned stomach, which is where he had his first ever tattoo – the Gillingham Football Club horse logo. 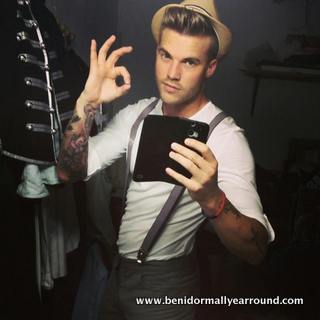 Troy studied graphic design at college for 3 years in between doing some part time modeling to supplement his income – something which he would like to get back into again. But in the meantime he loves his lifestyle here – singing which he is passionate about, luckily performing every night and leaving his days free. He keeps himself very busy and loves taking his husky dog Kia out for long walks – in fact, he is about to adopt another rescue puppy to keep Kia company. Wow talented, good looking and caring – I can´t believe he is still single and hasn´t been snapped up by some gorgeous girl!

You can catch Troy´s Olly Murs show every night in Talk of the Coast at 11:00pm and in Jail Rock on Monday, Friday and Saturday at 10:00pm.

0 #2 lucy doyle 2014-07-12 19:12
Saw oily murs in benidorm his how was really good and such a genuing lovely guy very talented cant wait to see him at the oily murs show next year when i go back for a holiday
Quote
0 #1 Sharron hawkins 2014-07-12 16:40
Troy is everything you said and more, if u haven't seen him when you've been to benidorm then you've missed the best act there! Amazing talent and all round great guy! Also makes tine to speak to fans and have photos taken! Everything an act should be :)
Quote
Refresh comments list